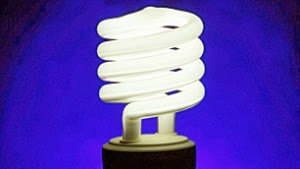 I've always been a bit skeptical about the compact fluorescent bulb 'revolution'. Sure, the premise makes sense; if we have a choice between an incandescent bulb and compact fluorescent bulb, we ought to choose the latter. The problem is the speed and scope with which this change has occurred - as a result we are perhaps seeing some unintended consequences which negate the benefits that the revolution was supposed to bring with it. For instance, a new study (reported about in the CBC here) has found that a majority of Canadian households don't know how to properly dispose of these bulbs. The result is likely wide-scale mercury contamination - both of Canadian landfills and countless homes (did you know when a compact bulb shatters you are supposed to leave the room!?). New legislation implemented in January 2014 has banned the sale of incandescent bulbs, which de facto means that all new lightbulbs are mercury-containing compact fluorescent bulbs... And yet there is a significant lack of regulation and programming at all levels of government to educate citizens and properly deal with bulb disposal. The change in policy has to take place at all phases along the production and consumption chain - including that of bulb disposal and recycling. The fact that most Canadians are not properly disposing of such bulbs indicates to me that we are not adequately prepared for such sweeping changes.

Efforts like Project Porchlight, on the whole, are positive initiatives which mean well and do result in social change... but does it really make sense to trash a perfectly good lightbulb just to replace it with a more efficient one? Doesn't this just create one problem while solving another? It would be thoroughly disappointing if people were throwing out perfectly good light bulbs merely because they are incandescent. One reason incandescent bulbs are less 'efficient' is that they give off lots of heat. But in the winter, this heat loss, overall, is not 'wasted' - it's heat that no longer must be produced by oil or gas furnaces! As the owner of farm chickens, I appreciate the impressive heat produced by an incandescent bulb, which is often just enough to keep a coop warm in cold weather. True, one needs to be cognizant of replacing these bulbs when it gets warmer outside... but as far as I'm concerned I'm going to be storing incandescent bulbs for the winter season, not trashing them when they are fully functional.
Posted by Ryan Katz at 12:49 PM
Email ThisBlogThis!Share to TwitterShare to FacebookShare to Pinterest
Discussion Topics... Efficiency, Lightbulbs