[NOTE: This post was originally published on my 'non-academic' blog - The Organic Intellectual: Tribute to an Idea - on October 31st, 2012. I wrote a number of reflective pieces in my doctoral seminar which I've decided to share here in the coming weeks...] 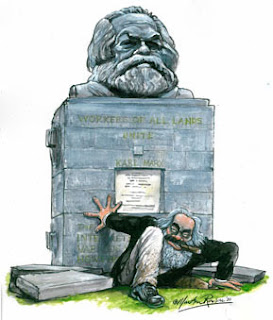 I've been reading a lot of David Harvey lately. In particular, I've looked at some of his earlier works when he more closely identified as a Geographer (today Harvey is technically a Professor of Cultural Anthropology at the City University of New York Graduate Center - but his formal training was in Geography). It may strike some readers as 'news' that Harvey is a geographer. After all, today his work is studied within most disciplines of the social sciences and humanities. In fact, Harvey is one of the few living social theorists who has ranked amongst the top twenty most-cited authors in academia (a list that includes the likes of Foucault, Weber, Kant, Chomsky, and Freud).

Harvey has long been deemed a leading 'Marxist' theorist because of his close reading of Marx's texts - in particular Capital and the Grundrisse. However, as he has said on video, he's less interested in how he is identified by others and more interested in reflecting on the strengths and weaknesses of Marxist analysis to see if it offers both explanatory and practical power to contemporary life. In a recent interview with Hector Agredano in the International Socialist Review (Issue 73, Sept./Oct. 2010), Harvey showcased this self-reflexive interpretation of the Marxist method:

"Within Marxism we also have to look back and be very critical of what I see as some very conservative, rather dogmatic understandings of the world... What a good Marxist does is to look at the conventional situation and do an analysis all over again given Marx’s method to try and understand the dynamics of the situation and therefore try to intervene in a way which is going to push society toward more democratic and more egalitarian solutions, and ultimately to solutions that are entirely non-capitalistic. I think that Marxism as a revolutionary theory and as a revolutionary practice has much to teach. There is a tremendous historical record, but we have to approach that historical record with some critical perspectives on what we did wrong as well as what we did right."

But what exactly is this 'Marxist method' that Harvey has helped to refine? The term 'historical materialism' has come to characterize what Marx and Engels called "the materialist conception of history" - a method of analyzing societal transformation through uncovering the dynamics of productive forces and social relations. In the preface to Marx's 1859 A Contribution to the Critique of Political Economy, Marx explains the concept of the 'mode of production' - the combination of both a material, economic, foundational structure which relates in dialectical form* with a subjective, political structure.

In his analysis of civilizational history, Marx found that periods of social transformation (in which old modes of production were replaced with new ones) occurred as a result of conflict between these two structures (material and subjective). Along these lines one could say that today we live in a global capitalist mode of production. At a material level 'capitalism' clearly characterizes the nature of current productive forces. However, at the level of social consciousness, while capitalist subjectivity is dominant, there is arguably some level of contestation of neoliberal capitalist ideology, particularly in the wake of the 2008 global financial crisis. Where that leaves us as far as opportunities for future transformation is an important topic for political strategizing...

Now, there are a couple of ways in which this conception of history stood Marx apart from other political economists of his time (such as Adam Smith, David Ricardo, and Thomas Malthus):
Now, as the above quotation by Harvey suggests, at times this method has been misused and misunderstood (brutal self proclaimed 'Marxist' regimes come to mind). However, at other times historical materialism has served as a foundation to rich and foundational analyses in a variety of scholarly disciplines. For example, influential scholars employing historical materialist analysis can be found in the obviously-applicable fields of history (key examples would be Eric Hobsbawm and E.P. Thompson) and economics (as exemplified by Paul Sweezy's work), sociology and political philosophy (exemplified in the works of John Bellamy Foster, Jürgen Habermas and Frankfurt School theorists Max Horkheimer, Theodor Adorno, Herbert Marcuse, among others), international relations (see the work of Robert W. Cox, for example), criminology (Willem Adrian Bonger and Thorsten Sellin), feminism and gender studies (Lise Vogel, Margaret Benston and Peggy Morton, among many others), psychology (Joel Kovel), and so on... Of course, David Harvey fits the bill as perhaps the most influential geographer who has employed the historical materialist method.

So what exactly does this method mean in the geographical context? As GeoDataZone: The Earth Encyclopedia aptly notes: "Historical materialism in geography attempts to explain patterns and processes of spatial and environmental change as the result of the specific social relations of capitalism or other modes of production". In other words, it attempts to ground both material and subjective changes to space and environment within existing political economic structures. To illustrate: If it bothers you that common spatial and socio-ecological 'issues' such as urbanization, poverty, and climate change are typically discussed (in the media and by political leaders) as fixable problems that could be 'solved' through new technologies and band-aid solutions, all of which fail to address the structural causes of said problems in the first place - then you may be the type of person who would benefit from an historical materialist analysis!

The encyclopedia entry goes on to suggest that "historical materialist research has more recently integrated with broader social and cultural theory. Historical materialists rejected in particular the self-proclaimed objectivity of logical positivism, and more generally the intellectual hegemony of 'bourgeois geography' [read traditional geography], mainly because both have been complicit more with oppression, imperialism, and racism than with any substantive form of social emancipation." In other words, an historical materialist geography must normatively work towards change for the better, and envision new ways of social organization that are more just. Harvey's article "On the History and Present Condition of Geography: An Historical Materialist Manifesto" (in The Professional Geographer 36, 1984) can be credited with bringing this critical, normative vision to the discipline.

Finally, international relations scholar Robert W. Cox (in Keohane's Neorealism and its Critics, 1986) has identified four key tenets of the historical materialist method which may also be of interest to the historical materialist geographer:
So there you have it - the beginnings of an attempt to sketch out and identify the historical materialist method, which if done right, in Harvey's conception (1984):
* Interpreting the relationship between these two structures as 'dialectical' is important and is somewhat at the heart of a disagreement between 'historical materialism' and 'structural Marxist' analysis (as showcased in the works of Louis Althusser and Nicos Poulantzas). The latter is ahistorical, largely theoretical, and has been accused by some as containing an essentialist epistemology (see Robert W. Cox's essay "Social Forces, Sates and World Orders: Beyond International Relations").
Posted by Ryan Katz at 8:45 AM
Email ThisBlogThis!Share to TwitterShare to FacebookShare to Pinterest
Discussion Topics... David Harvey, Historical Materialism, Karl Marx