[Cultural Geography] On The Canadian

[NOTE: This piece was originally published on my now-retired non-academic blog, The Organic Intellectual: Tribute to an Idea, in January 2011. I've decided to share it here on my new website in slightly edited form].

On The Canadian
(Or, Everything You Ever Wanted to Know About Travelling ‘Comfort’ Class on VIA Rail’s Cross-Country ‘Land Cruise’, and More…) 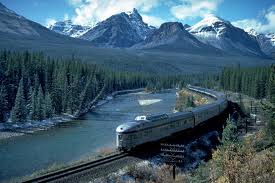 Welcome to The Canadian
VIA Rail is a crown corporation that owns and operates Canada’s only national-level passenger rail service. It is possible to travel across the country, on ten core route lines, which stretch from West Coast to East Coast, and as far north as Churchill, Manitoba. The majority of VIA’s passenger traffic occurs within the busy  ‘corridor’ between Québec City and Windsor, where journeys take place within a few hours and the trains (at present) offer free wireless internet service. The corridor sees multiple trips per day, and covers a region which serves as home to over half of Canada’s population.

However, it is quite a different experience to travel the multiple-overnight journey between Toronto and Vancouver. This cross-country journey is one of 4,466 kilometers, and is typically completed in over 82 hours (more below on why it takes so long). The Toronto-Vancouver line is called The Canadian, and it travels through numerous small towns and some bigger cities along the route, with planned rest stops in Capreol (near Sudbury), Hornepayne, Sioux Lookout, Winnipeg, Saskatoon, Edmonton, Jasper and Kamloops (and sometimes other smaller towns if the train is ahead of schedule). The Canadian departs three times a week (leaving from Toronto at 10:00pm on Tuesdays, Thursdays and Saturdays; and leaving Vancouver at 8:30pm on Tuesdays, Fridays, and Sundays). [Note, recent cutbacks have resulted in a reduced and altered schedule - with one less train travelling in each direction each week]. 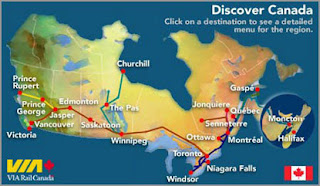 My Experiences...
I have traveled on The Canadian four times (one trip between Toronto and Edmonton at the end of 2009, returning in the beginning of 2010; and the other between Toronto and Vancouver at the end of 2010, returning in the beginning of 2011). By no means does this make me an ‘expert’ – if you travel on The Canadian you are bound to meet others on board who regularly travel on this line (though typically not the entire length of the journey). However, having spent nearly two weeks of my life The Canadian, having spoken with a number of other cross-country travelers, and having done a bit of additional research, I’ve learned a thing or two about this specific passenger rail experience. If you are considering taking The Canadian you may find some of this information useful (I encourage skipping the boring parts by using the subheadings below).

Who is taking The Canadian?
There are many reasons why one may decide to take the train between various towns or cities along The Canadian route, as opposed to driving, taking the bus, or flying, even though the latter three options are typically quicker. I’ve encountered many reasons when asking fellow passengers why they decided to take the Canadian, and classified these reasons into six archetypes:
Figure 2: The Canadian with Three Locomotives
(Lack of) Speed
As mentioned above, the train travels at a slow average speed. While the F40PH-2D locomotive can reach speeds of 145 kilometers per hour, The Canadian typically does not travel that fast. Often (approximately once every few hours during the entire four day trip), the train will come to a complete stop alongside the tracks and wait. “Wait for what?” you might ask… and herein lies the story of VIA Rail’s present sad state of affairs (of which I will discuss in more detail in a future post)…. We wait for freight trains to go by. As VIA Rail’s travel guide, Canada by Train, written by Chris Hanus and John Shaske, suggests, some freights are “up to two miles long. Usually their size exceeds the length of siding tracks enabling trains to pass each other. Inevitably, the mammoth freights are given priority and passenger trains must wait on siding tracks until it is clear to continue” (120). However, there is a simpler reason why VIA is required to wait on the side of the tracks – it doesn’t own them! The freight companies own the tracks. As a CN employee told me, VIA currently rents track time from CN, thanks to a 3-year contract worth $60 million (this is obscene considering the legacy of CN as a nationally owned rail enterprise, now bilking money from the Canadian taxpayer for VIA’s mediated rail access).  This is one of the main reasons why The Canadian is so slow. Given the 82 hour journey and the distance of 4,466 km, the train travels at an average speed of 54.5 km/h (this, of course, includes stops). Freight shipments, meanwhile, are guaranteed to travel from Vancouver’s port to Chicago in no more than 48 hours – it just goes to show how much of a priority passenger rail is in Canada!

Sleeping
For the so-called comfort class, VIA’s sleeping arrangements are, by far, the WORST part of the journey. The seats recline to about 45 degrees, and an angled stool unfolds from under the seat. Light sleepers out there be warned - you will have trouble getting some shut-eye! When the train is full, sleeping is difficult and at best uncomfortable. When the train is not full, however, a somewhat restless sleep can be attained by finding one’s own pair of seats and folding the body into various configurations. I never sleep well the first night of a journey on The Canadian, but luckily, because I am so exhausted and tired on the second night, sleep comes easier, regardless of the uncomfortable arrangements and all the stimuli (shaking cars, the loud humdrum of the train, the constants overhead lights, etc.). On my most recent journey I asked one of the attendants if she’d every seen passengers sleep in the main isle. She answered that she has seen just about every possible inch of the train taken for a sleeping location. After a few days on the train, many travelers are just pining for a flat place to lie down… a few odd places may provide such a space, aside from the main isle: The large overhead baggage shelves, the rectangular baggage storage area at the back of each economy car, the café car, and the dome car (by lying across the dividing aisle) – the VIA attendant confirmed she had seen passengers trying to sleep in all of these locations.

Addendum:
As noted above, I eventually ran the figures for whether The Canadian is more 'efficient' than air travel or bus travel. My results are included below in a post I have made to the Critical Geographers' E-List:

Thanks Susan, for raising the question about train travel to the AAG.

I've spent many hours on the train here in Canada, largely as part of an effort to cut down on carbon-intensive air travel. The Amtrak line from Montreal to New York (which I took for last year's AAG) is a relatively comfortable 11 hour trip, though the wireless internet is extremely spotty through the Adirondacks.

Unfortunately, as others have hinted in their replies, long-distance passenger rail travel in North America is not very practical these days (mostly because it is extremely slow). What's worse, if you look into the figures, it turns out long distance rail travel can actually produce more emissions than air travel (at least this is the case with VIA Rail once you leave the Quebec City - Windsor Corridor; and I assume it is also the case with Amtrak's cross-country service). The problem stems from low occupancy on VIA's long haul trains and the archaic diesel-electric technology used. Whereas airplanes and buses cram as many people in as possible, the long distance trains in Canada typically feature numerous 'upper class' cars with 'spacious' cabins.

There is a very interesting table on page 167 of Volume 2 of the 1992 Royal Commission on National Passenger Transportation by Louis Hyndman (here's a link to the publication record: http://publications.gc.ca/pub?id=13805&sl=0) comparing the per passenger emissions on various modes for both short haul and long haul trips. The table points out that within the Quebec City- Windsor corridor (where there are no 'upper class' cars), rail travel is quite efficient relative to automobiles and airplanes. Yet on a long haul trip, the train actually produces more Carbon Monoxide, Volatile Organic Compounds, Nitrous Oxides, and Carbon Dioxide than buses and airplanes. It even produces more Carbon Dioxide than an automobile trip of the same distance! Admittedly the data is from 1989, and fuel engines have become much more efficient since then. Yet this is the case across the modes (particularly where airplanes are concerned - as airlines are trying desperately to save on fuel costs). All this to say, depending on the scenario, it is quite possible that air travel to next year's AAG would be more efficient than rail travel (in terms of both time and fuel consumption). Perhaps the real question - as others have noted - is whether it is sustainable to travel such long distances for a conference in the first place?

Posted by Ryan Katz at 1:50 PM
Email ThisBlogThis!Share to TwitterShare to FacebookShare to Pinterest
Discussion Topics... Passenger Rail, Via Rail