A Fruitful Research Trip to Alberta

The weather has been nuts and I've been hunkering down at home for days now. In part my solitude is a break from what was a busy research trip to Alberta last week, which involved traveling to various parts of the province to conduct interviews and visit archives. I was carrying out research for two main projects in Alberta: First, I interviewed four individuals who had something to say about the Calgary-Edmonton high-speed rail corridor, and second, I tracked down some archival documents relating to a paper I am writing about the origins of term 'oil sands'. Here is a little update on what I found:

Interviews on High-Speed Rail
I was lucky to interview all four of my requested subjects, who for reasons of anonymity I can only refer to here as 1) a "high-speed rail entrepreneur"; 2) a "public policy organization analyst"; 3) a "government transportation official"; and 4) a "labour organization spokesperson". All of them were asked similar questions regarding the political economic context within which an Alberta high-speed rail should (or should not) be introduced. This is part of my doctoral research, and while my analysis is still ongoing, one set of findings I can report definitively here is that is highly unlikely that the government of Alberta will introduce a high-speed rail line any time soon. Rather, the only way this type of project is apt to come about is if it is entirely financed and operated by the private sector. This is starkly different that the kinds of things you would hear in the media just a few months ago - that this could come about as a so-called "Public Private Partnership" (see, for example, the claims on the albertabullettrain.com "Quick Facts" page). In recent years political leaders in Alberta have made ovations to the idea of introducing a high-speed rail line between the province's two busiest cities (which presumably would include stops at the Edmonton airport, Red Deer, and the Calgary airport in addition to its downtown nodes). A number of studies have been carried out as well, most recently by the Van Horne Institute (2004) and by TEMS (2008). The studies point to existing demand, as well as a range of expected social, ecological and economic benefits and spinoffs. Yet after these interviews is seems the only willingness to be a part of such a project on the government's behalf is to be an external regulator.
What I am fascinated by is the different political economic contexts which serve as a foundation for what is presumed to be the 'optimal' situation for HSR, and the different realities that these foundations would produce if the project were indeed to go forward. Three of my interview subjects felt that a totally private enterprise was the best way to carry out the project. Of these three two were in favour of introducing high-speed rail, and one felt that there was simply no need for it as it would cost taxpayers too much. On the contrary, one interview subject was in favour of the project but felt that it should be entirely public. Next up is a research trip to Quebec to talk about the Quebec City-Windsor corridor line. It will be very interesting to see how the Eastern and Western situations compare.

Archival Documents about the Oil Sands
As part of another project I have been trying to track down some of the earliest official uses of the term "oil sands" for a paper about the institutionalization of this term and its broader implications. I was aware of some really neat archival documents housed at the Glenbow Archives in Calgary and the Provincial Archives of Alberta in Edmonton. The staff at both of these archives were exceptionally generous in helping me find what I was looking for. First, at the Glenbow archives I was hoping to find the proceedings of what is known as the "Athabasca Oil Sands Conference". This was a conference held in Edmonton in September, 1951. I've known about this conference since conducting my M.A. research back in 2009, but I've always been interested to know more about what was said, who participated, and how this term (oil sands) in particular was being intentionally propagated as a replacement for "tar sands" and "bituminous sands" - which were both more commonly used at that time. It was such a delight to find a folder at Glenbow with my name on it. When I opened it up, this is what I saw: 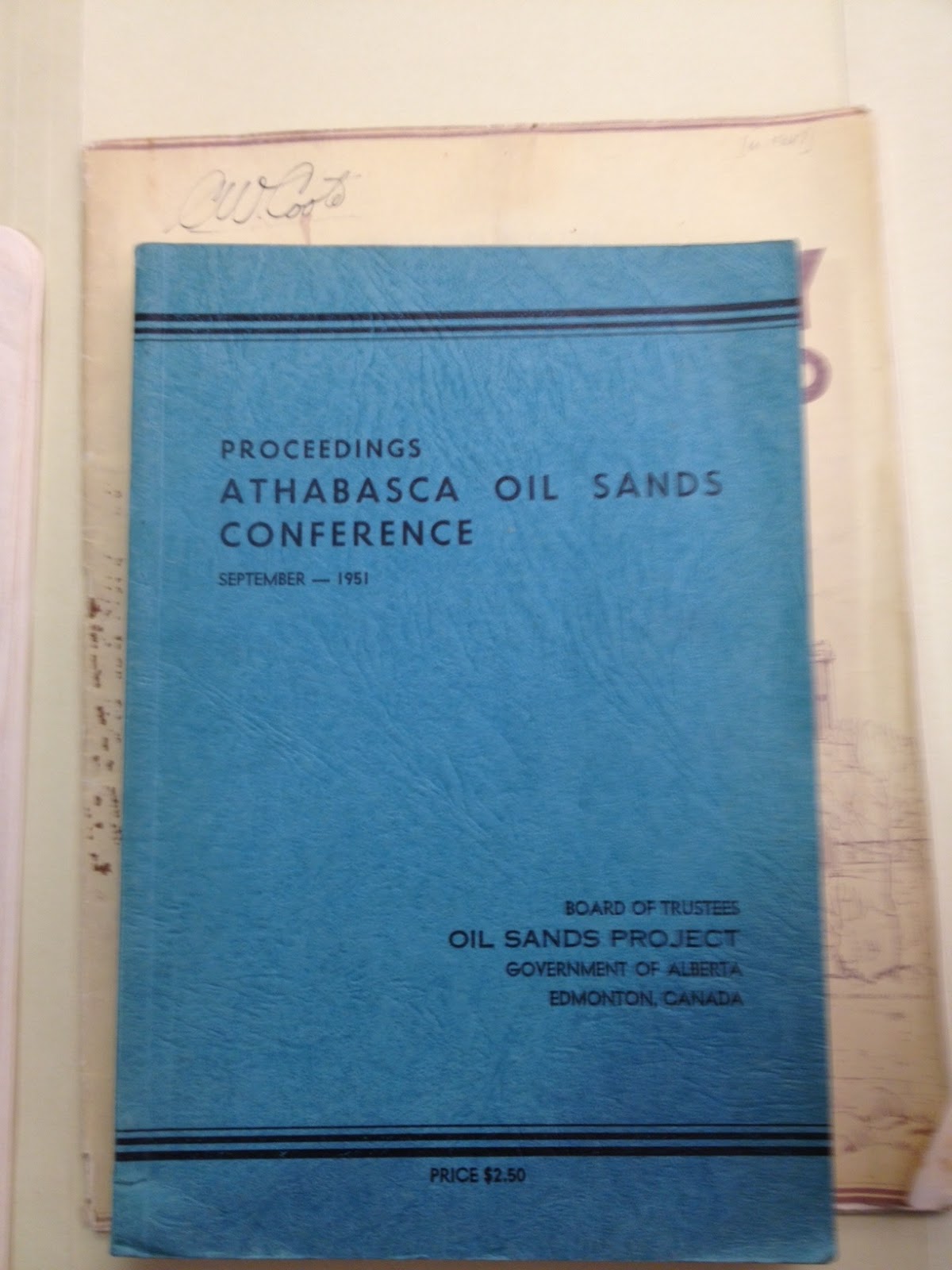 This 371 page gem was exactly what I looking for. It answered a host of outstanding questions. Of interest was the repeated use of the terms "bituminous sands" and "tar sands" - even by government officials. I also found - finally - the name of the government official who had proclaimed at this conference the following statement: "May the words 'welcome' and 'oil sands' ever be closely associated!"This quotation is mentioned by Larry Pratt in his 1976 book The Tar Sands (it's on page 31), but he doesn't attribute a name to the quotation, he just notes that a government official said this at the conference. For years I've wanted to know who actually said it, and now I know the answer. It was said by then Minister of Highways for the provincial government - the Honourable Gordon E. Taylor. It was fitting that the Minister of Highways made this ovation to big oil; As he said in the same speech, "The world's demand for more and more petroleum products increases every day. Railways, industrial consumption, household requirements, automobiles, trucks and tractors accelerate this peace-time demand" (p. 166 of the proceedings). In short, he was welcoming the world's biggest energy companies to come and do business in Alberta, and part of this welcoming involved convincing them that this peculiar substance (bitumen) could actually be converted into synthetic oil and thus used just as one would use (real) crude oil, not simply as bitumen had hitherto been used (as a raw material for paving roads and patching canoes!).
Then it was on to the Provincial Archives. There I wanted to look at the Max W. Ball fonds and the Abasand fonds. Max W. Ball seems to be the first one to have really pushed the term 'oil sands'. In the 1920s there was the "International Bitumen Company" (which later became the "Tar Sands Products Ltd.") as well as the Bituminous Sands Company (registered in Colorado by a close associate of Ball's). But then in 1930 Ball and his associated start up the Canadian Northern Oil Sands Product Ltd. (which later became Abasand Oils). I wanted to see if the archival materials had any information about how Max Ball seemed to come up with this name, what his thought process was at the time. I was astounded at what I found. Within the three boxes full of archival documents within the Abasand fonds are hundreds of correspondences between Ball and other people,  most notably that associate I mentioned (whose name was B.O. Jones). These are handwritten letters, typed letters, as well as telegrams! I was amazed to find a series of correspondences between these two dating from 1930, in which they were haggling out the name of their future company. Of particular interest to Ball was including the word "sands" within the company name, since this had a certain allure. Here is an example of one telegram (two pages): 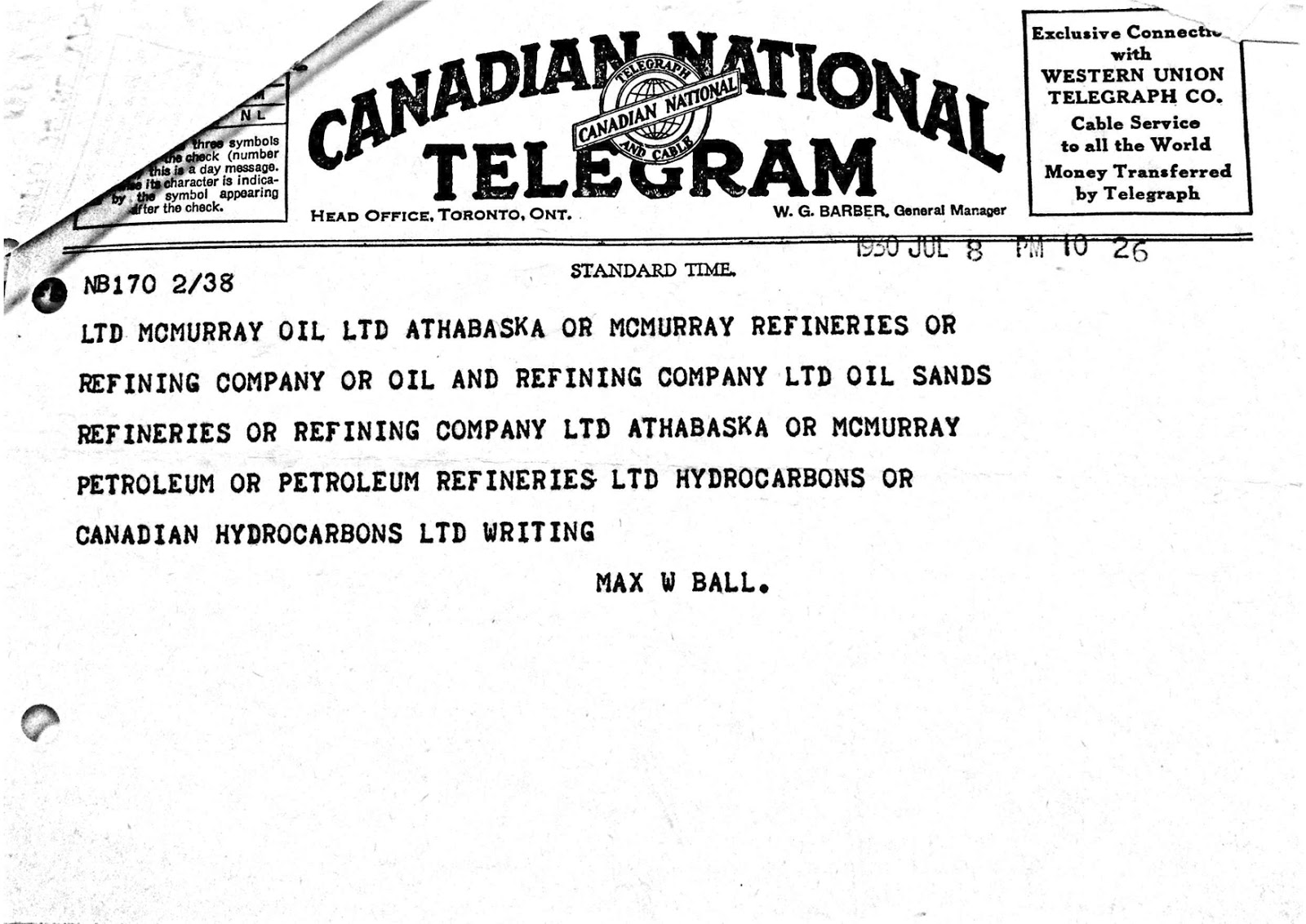 These discussions were quite interesting to read, but they did not give me a sense of what Ball was thinking in terms of the term 'oil sands'. Then I found a report Ball had written in 1930 titled "The Oil Sands of the Athabaska Region of Alberta, Canada: A Summary of Available Information". On the very first page I found exactly what I was looking for, Ball's own rationale explaining the different terms available and why he has chosen to use the term "oil sands": 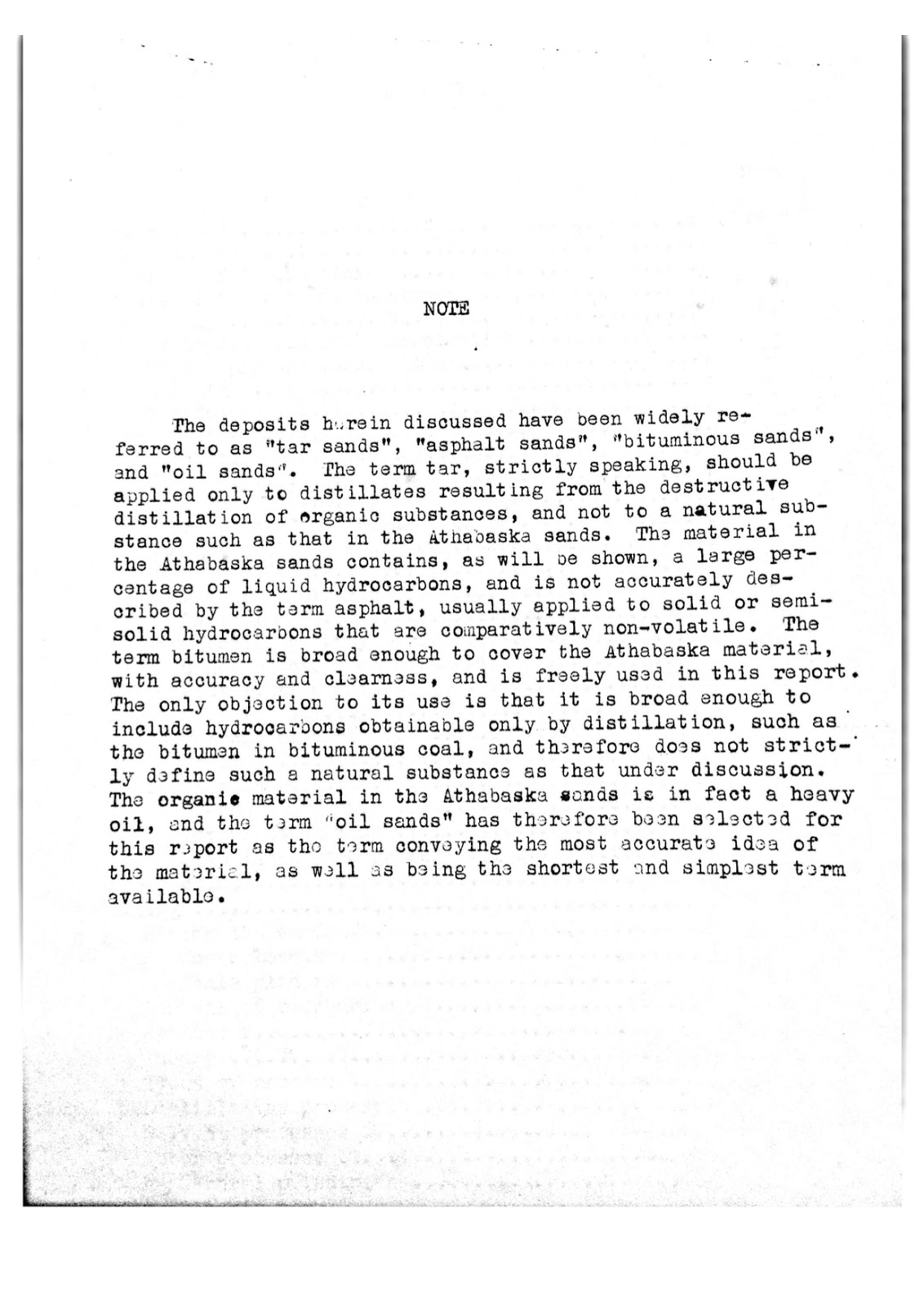 This document is quite incredible, especially when considering how 80 years later the Government of Alberta and the Oil Industry are going through the same exercise (trying to convince their 'audience' that 'oil sands' is the 'correct term' and that 'tar sands' and 'bituminous sands' are thus 'inaccurate'). Here's one 2008 clip from a provincial government report noting the same rationale: 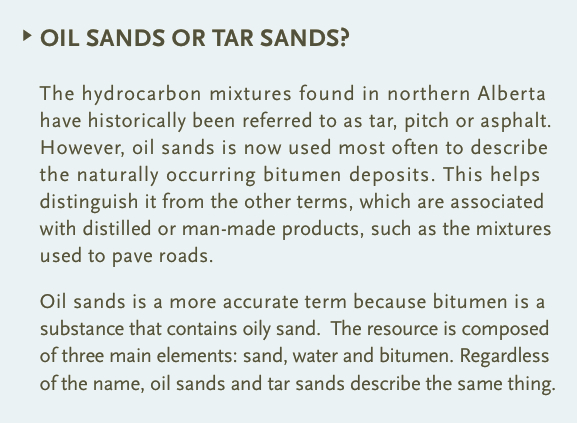 You'll notice some similarities with the following clip from the website of the Canadian Association of Petroleum Producers website: 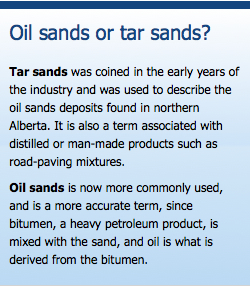 I've written elsewhere about the material implications about these changing terms and their meanings. I am happy that I now how some additional archival materials to supplement my historical knowledge of the origins of these terms.