NOTE: A revised version of this post will be published on the Center for International Policy Studies blog next week (August 8, 2021).

The summer of 2021 may mark a potential turning point in Canada’s collective climate consciousness: In June, an unprecedented “heat dome” in Western Canada saw temperatures soar to record heights. The whole world watched as the town of Lytton, BC, hit 49.6°C, completely shattering the country’s previous heat records. Then came the wildfires – hundreds of them – followed by relentless crop-killing drought throughout much of the prairies, and hazy smoke-filled skies across the rest of the country for weeks. The highly anticipated release of the IPCC’s Sixth Climate Assessment in August seemed to solidify for many Canadians just how destabilizing climate change will be in their own lifetimes.

It is perhaps unsurprising that climate change now ranks as the number one concern of Canadian voters. Now that the Trudeau Liberals have called a snap election, let us take a moment to evaluate the four major parties’ climate platforms. With the exception of the Green Party, which hasn’t yet released a full platform, the Liberals, Conservatives and NDP each have dedicated climate plan documents, available here, here, and here, respectively. For its part, Green Party leader Annamie Paul has suggested that the party’s stance on climate change is “virtually identical” to what it was during the 2019 election campaign (so I base my analysis on that document, which can be found here). For this analysis I developed a fairly rudimentary ‘rubric’ to grade each climate plan along four axes: ambition, feasibility, effectiveness, and accessibility. Here’s a breakdown for each category, with the final ‘grades’ posted below:

Here I sought to determine how ambitious each plan was relative to Canada’s current climate policy framework. Ramping up ambition is important domestically, as it signals to voters how urgent of an issue the government considers climate change to be, and hints at the scale of change required to address the problem. Canada’s current climate policy framework, as shaped by the Trudeau liberals over the last half decade, is more ambitious than the prior Harper government’s climate policy, thanks to a wide range of programs and policies that have been introduced (in particular, the Pan Canadian Framework on Clean Growth and Climate Change, which includes carbon pricing as a core element of the plan; and the Net Zero Accountability Act, which requires the government to set legally-binding five-year GHG reduction targets through to reaching Net Zero in 2050).

I graded each party on a scale of 1 to 10, where 1 marks a major scaling back of ambition; 5 marks the same level of ambition as the government’s current policy; and 10 marks a major ramping up of ambition. The Liberals scored a 7/10, in part because they have expressed a clear desire to take their climate mitigation strategy to the next level, including ramping up Canada’s GHG reduction target, earlier this year, to 40-45% below 2005 levels by 2030. The Conservatives have stated a desire to scale back to the Harper era target (30% below 2005 levels by 2030). That’s a major problem, as it would mark a violation of the Paris Agreement rules. For this reason, they scored a low 4/10. If the Liberals mark a scaling-up of ambition, then the NDP’s plan does so even further, with a stated reduction of 50% below 2005 levels by 2030 (earning them a score of 8/10). The Greens, who in 2019 called for a 60% reduction below 2005 levels by 2030 as well as a complete re-orientation of the economy around climate change mitigation, earned an impressive 9/10 for ambition.

Of course, it’s one thing to have ambition, quite another thing to have a viable plan to get us there. Unsurprisingly, those parties with the most ambition generally have plans that seem harder to swallow given Canada’s contemporary political reality. Here I asked, on a scale of 1 to 10, how feasible each plan was in terms of being “palatable” and “adoptable” given Canada’s contemporary social, political and economic contexts, with 1 representing a plan that will face major obstacles; 5 representing a ‘typical’ level of political support and opposition seen in Canadian policy implementation; and 10 marking a plan that will easily garner enough support to come to fruition.

For context, it’s important to remember how wedded parts of the country are, politically and economically, to oil and gas production. Let us also not forget the torrent of opposition that often comes alongside new oil and gas infrastructure (in particular, pipeline projects). Canada, in short, is a divided nation on the question of whether fossil fuels have any role to play in the future. The country also has a complex federal structure where various areas of overlapping jurisdiction between provinces and the national government compete, making climate policy a slow and hiccup-ridden process. On one hand, the Liberals have a high level of political support for their climate objectives, even from voters in other parties, leading to a fairly high score on feasibility. However, because of the tensions simmering beneath the surface of its carbon pricing plan, the Liberals’ platform scored a 7/10. There are plenty of actors, in short, that will seek – and have the means – to throw wrenches in Trudeau’s plans. The Conservative plan scored a titch higher (at 8/10). The reality is that because most Canadians want to see climate action, it is unlikely that there would be much opposition to any climate-based policies that the Conservatives seek to put in place, with perhaps the exception of the increasingly vocal youth climate movement, which is unlikely to take kindly to a roll-back in ambition. The NDP plan would likely garner support from many corners of the Canadian populace, but its proposed deep emissions cuts are likely to push up against social and cultural norms in various parts of the country (they got 6/10); the Greens would push even more buttons (the policy changes required for a 60% reduction of 2005 emissions over the next 9 years would be very difficult to bring about politically, so their score was 4/10).

In terms of effectiveness, I sought to measure how successful the plan would be in meeting global climate change mitigation goals if the plan were fully instituted. I asked, on a scale of 1 to 10, how effective each plan would be in terms of putting Canada on a path towards supporting the Paris temperature targets of limiting global warming to between 1.5° and 2.0° C (with 1 representing a plan that does not come close to supporting Canada’s required contributions; 5 marking a plan that approaches the 2.0° C threshold; and 10 denoting a plan that would firmly put Canada in the group of countries helping the world get to within the 1.5° to 2.0° C temperature target).

Canada’s current planned policies put the country on track for what Climate Tracker calls an “insufficient” contribution to climate mitigation, meaning that if all other countries had the same level of ambition as Canada, the world would likely see up to 3°C of warming by 2100. Given the Liberal plan to improve emissions reduction targets and its overall comprehensiveness, I’m tempted to offer a score of 6/10. However, the plan’s relatively high reliance on carbon sequestration technology, its unwillingness to embrace the idea of full decarbonization (using instead the oil and gas sector’s subversive language on “Net Zero”), and its central focus on the ever-elusive idea of “green growth”, bring the score down to a 4/10. The truth is it’s going to be incredibly difficult to make Canada’s economy compliant with Paris’ global temperature goals without drastic changes to our economic and regulatory structure, because we’re starting from such a high baseline and have so little time to get to zero. For all their good intentions, the Liberal climate policy is too conservative in its attempts to achieve emissions reductions without changing the nation’s political economy too significantly. The Conservative plan is even worse as far as effectiveness goes. Yes, it offers up a range of tools mirroring some of the Liberal policies, including carbon pricing for individuals and corporate polluters, EV sales mandates, and billions in clean energy investments, but these place much of the GHG mitigation burden on greener market activity, which just isn’t going to cut it (they get a 2/10). The NDP scores a 6/10 for effectiveness (it’s got great broader plans, but it’s also a little light on details, so it’s hard to measure how effective these would be). The Greens score 7/10 (they offer a comprehensive set of policies, though it is a bit surprising to see them turn their back entirely on nuclear energy, which already accounts for 15% of Canada’s electricity generation and arguably should play some role if the foremost concern is climate change mitigation). While these latter two plans are indeed ambitious, they sadly only narrowly put Canada on track to support a global warming limit of below 2°C.

Even though a plan may garner sufficient political support, a plan’s overall quality can be weakened if it is seen to be “out of touch”. Here I’m looking at things like how each plan tackles the problem of incorporating various subtypes of Canada’s diverse population into the plan of action. To what extent do oil and gas workers, Indigenous communities, Canada’s rural population and urbanites, youth and elders, etc. see themselves represented in the plan? Is the platform presented as a “top-down” plan that citizens will be coerced to follow, or is it a fully-inclusive plan that Canadians from coast to coast to coast will willingly participate in? On a scale of 1 to 10, I sought to measure each plan’s “accessibility” in this regard. Part of the score was also reserved for the actual nature of the platform as a communication tool – since that is the first entry point for most climate voters seeking to determine whether the party has something to offer.

As far as grades go, the Liberals took a hit for having a plan that comes across as a tad out of touch with everyday Canadians (scoring a 5/10). Yes, different stakeholder groups are mentioned in the plan, but the plan is communicated more as “we’ve got a plan for you” than “we’re counting on your unique contribution”. The Conservative platform is notable for seeking to reach out to a number of different groups in Canada without alienating them, from oil sands workers to Indigenous peoples, to farmers and everyday Canadian families. Ironically though, the growing pool of climate-concerned voters may not be intimately enthused by the watered-down role expected of them (so the Conservatives scored a 6/10). The NDP score was hurt in part by just being a bit wordy – the plan comes across as overly academic, although they get points from strong worker incorporation through a focus on green jobs (score 5/10). The Green Party incurred a score reduction due to its likely interpretation as excluding workers in heavy-emitting sectors; many “comfortable” Canadian families will feel like the plan is an attack on their way of life (it also took an added hit for not having released a climate platform specifically for this election; final score 4/10).

In the end, we get a sense of the “shape” of each party’s plan by plotting the scores on a radar graph (see Figure 1). As expected, parties with lower ambition scores tend to have higher feasibility scores, and parties that have comprehensive effective plans are likely to be seen as less ‘accessible’ to everyday Canadians. That’s just how democracy rolls. 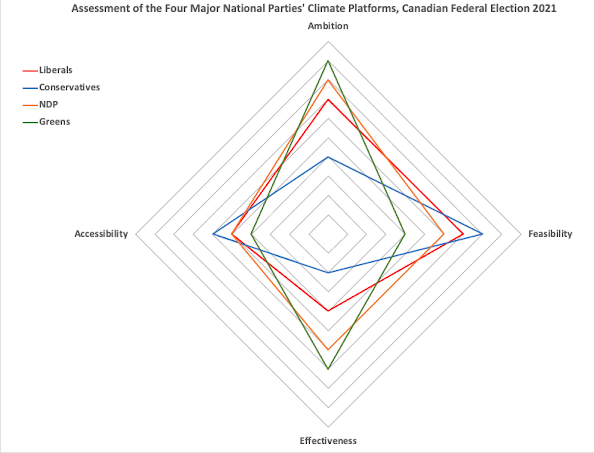 Finally, we can also tally up the cumulative scores to see which party receives the highest grade overall (Figure 2). Here, the NDP pulled ahead ever so slightly, with 25 points (out of a possible 40). They were followed by the Greens in second place (24/40); Liberals in third (at 23/40); and the Conservatives trailing behind at 20/40). Climate voters should consider this analysis critically, this is, after all, just one person’s subjective analysis. The bad news is that, in grading terms, no party scored higher than a “C”! While it’s certainly no easy task to come up with a viable climate plan that will please everyone, our country’s historically lax efforts on climate change mitigation make this evermore important for Election 44.
Figure 2: Cumulative Scores (out of 40), Party Climate Platforms, Election 44 (2021) 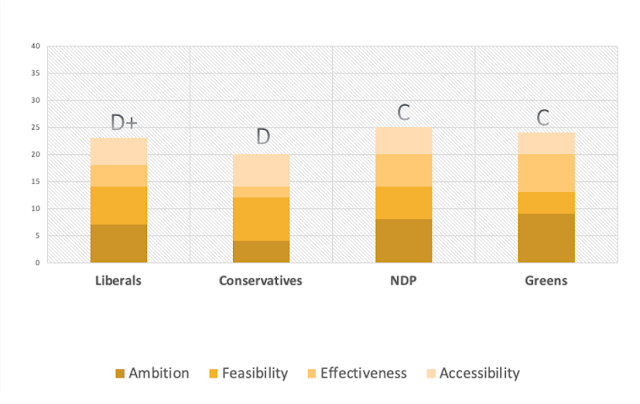